Deep concerns were raised by the Parliamentary Assembly of the Council of Europe (PACE) on Thursday over the construction of the Akkuyu nuclear power plant in Mersin, an earthquake-prone region of Turkey. The site of the plant lies only 85 kilometres across the sea from Cyprus.

PACE adopted a resolution which said that Turkey is constructing its first nuclear plant in very close proximity to its neighbouring countries.

The assembly asked Turkey to join the UN Convention on Environmental Impact Assessment in a Trans-boundary Context, also known as the Espoo Convention, and to take into account all concerns expressed, including those expressed by Turkish citizens.

It also requested that the Turkish government consult with neighbouring countries on the construction of the nuclear plant according to the International Convention on Nuclear Safety. 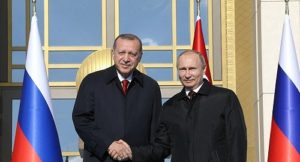 The construction of the Akkuyu nuclear plant to be built in Mersin, is a joint Turkish-Russian venture. A groundbreaking ceremony was held by President Recep Tayyip Erdoğan and his Russian counterpart Vladimir Putin on 3 April this year.

Following the ceremony, the Greek Cypriot government spokesman Prodromos Prodromou said that the nuclear plant “raises concerns for a possible impact in terms of safety because such a power plant in this area affects our country much more than the largest part of the Turkish territory”.

“Turkey did not take into account the grave reservations expressed by various quarters, nor did it heed the European Parliament’s call to terminate the construction plans since this is a seismologically vulnerable area”, he added. As early as May 2015, President Mustafa Akıncı, addressing an environmental workshop, said that building a nuclear power plant at Akkuyu in Mersin district, poses serious risks to the region and its inhabitants.

Environmentalists in Turkey are also concerned about the potentially destructive ecological consequences of the Akkuyu nuclear power plant and several organisations from Mersin have filed a lawsuit to halt construction of the power plant.