Plan B is to Abandon Plan A: Ozersay

Deputy PM and Foreign Minister Kudret Ozersay has said that the Turkish Cypriot side’s Plan B was to abandon Plan A which has served the status quo and imprisoned the Turkish Cypriots in the negotiations. Speaking to Ali Baturay of Kibris TV, he was asked whether the UBP-HP coalition government fully agree on the Cyprus problem and whether they had a Plan B, since they said that the negotiations to reach a federal solution had been exhausted. Ozersay replied that they agreed on the important fundamental issues on the Cyprus problem and said:

“We think that the time has come for discussion and having discussed different partnership models. Yes, we are openly saying that the federal partnership, aimed at sharing power and wealth, has been exhausted and it is not realistic and realisable under the conditions that exist today on the island and you will clearly see this in the government’s programme. I will not explain it at length, but our Plan B, with the simplest expression, is to abandon Plan A, which serves the status quo and imprisons the Turkish Cypriots at the negotiating table.

“A partnership taking as a basis the cooperation between the sides is much more realistic. Of course, the sides will decide on what this will be. […] For so many years, everyone understood different things regarding federation, but continued the negotiations pretending that they referred to the same thing. […] This caused the imprisonment of the Turkish Cypriot side, which has a status problem, at the table with never ending processes. Therefore, if the Greek Cypriots are not ready to share with us under these conditions, let us not deceive ourselves by pretending that we could establish a partnership based on sharing.

“If the international community will start questioning the status of the Greek Cypriots, their EU membership or the unilateral actions on the natural gas issue, a possibility of a partnership based on sharing will come up. However, as long as there is no change in these conditions, we should discuss partnership models, which will include cooperation at different levels instead of a partnership based on sharing. As the government, we will exhibit an approach which will be putting forward, explaining this reality in all the contacts we will be holding in our foreign policy. […]”, Ozersay concluded. 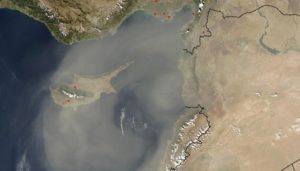