Status of Varosha Must Change: Ozersay 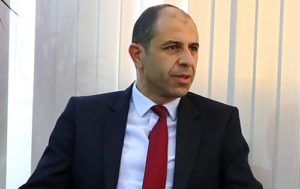 Since no common vision exists in Cyprus, the status of Varosha, the fenced-off in Turkish Cypriot-controlled Famagusta, needs to be changed to break the status quo, Turkish Cypriot Deputy Prime Minister and Foreign Minister Kudret Özersay has said.

“The closed Varosha has become a symbol of the status quo in Cyprus over the years. Therefore, after 50 years of negotiation with no results and no common vision between the parties, a change [in the status of] Varosha is needed to overturn the status quo. It is necessary to break this in both people’s perception and reality because there is something of an irrational situation there,” Özersay told state-run Anadolu Agency.

“Varosha is not on the government’s programme, but since we have a similar vision we aim to uncover the scientific data, accordingly shape the correct policy and make it come true in the future,” he added.

“Greek Cypriots say we need to talk about [Varosha] and it needs to re-open under United Nations,” he said.

But talks on Varosha with the Greek Cypriots will be futile since they will not cooperate on the natural gas reserves in the eastern Mediterranean, which is in the territory of Turkish Cyprus, because it is an “issue of sovereignty,” Özersay said.

Tension in the Mediterranean has been on the increase. The EU has threatened to impose sanctions on Turkey because of its gas exploration activities in the Eastern Mediterranean. The Greek Cypriot administration has refused an offer by the Turkish Cypriot government to conduct joint drilling activities.

If Greek Cypriots want to change the situation, they need to reconsider their approach, he added.

“If we are talking about an international friction, especially an ethnic one, the parties should at least have similar needs, even if they are not in the same direction for a resolution. This mutual need does not exist, especially with the conditions of the Greek Cypriot side,” he added.

Solving the Cyprus problem has been hindered by the fact that Greek Cyprus became a member of the EU, said Özersay.

“If Greek Cyprus can become a member of the EU without solving the Cyprus issue, gets treated as the sole legal government and is told that is can extract natural gas and transfer it to the world’s markets, then ‘why should the Cyprus issue be solved’ is a fair question,” he said.

“A federal partnership under these conditions does not seem realistic,” he added.

According to Özersay, either change the existing conditions for a federal partnership or new ideas need to be discussed in order to solve the Cyprus problem.