The new coalition government’s programme forged by the National Unity Party (UBP) and the People’s Party (HP) was read to the assembly by Prime Minister Ersin Tatar on Monday. Tatar said that they had come to office during a difficult period and that economic development would be their first priority. Referring to the natural gas issue, Tatar argued that the island of Cyprus holds a strategic position in the Middle East and the Eastern Mediterranean and added that according to experts, Turkey would be a very appropriate candidate to become an energy transition centre if a permanent solution to the Cyprus problem was found and broad-based cooperation was reached in the area. “If we do not take the necessary measures against those who try to usurp our rights, the future generations will not forgive us”, he said, adding that his government would try to have good relations with motherland Turkey.

According to Tatar, their primary target in foreign policy would be to make their voice heard internationally and the protection of the Turkish Cypriots’ legitimate rights and interests in all fields, not only in the Cyprus problem. 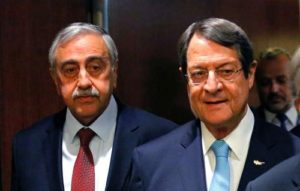 Referring to the Cyprus problem, he pointed out that the fifty-year long negotiating process showed that the federal solution model, which is based on sharing, has been exhausted and that federation was not a realistic model under the current circumstances. He reiterated the charge that the Greek Cypriot side was not ready to share the island’s wealth and administration with the Turkish Cypriots. He also said that as long as the Greek Cypriot mentality does not change, the federal partnership based on sharing did not seem realistic in the near future and that there was no common ground between the sides. He further added that new “much more realistic ideas” which could be realisable should come to the table, including different models of partnership based on cooperation on the one hand and on the existence of two states in the EU on the other.

“Even though a permanent and comprehensive solution to the Cyprus problem could not be found, our government will support the cooperation between the institutions of the two sides in the economy, trade, tourism, human rights and other similar fields”, he pledged, adding that they would exhibit a positive approach to confidence-building measures which did not harm the fundamental positions of the Turkish Cypriot side. The prime minister also noted that they would continue shaping their policies knowing that, de facto, the presence of UNFICYP on the island was not the element which protects peace between the two sides and preserving the view that the UN’s peace operation has become one of the main elements and even a symbol of the status quo. He said that they would intensify their efforts in the direction of turning UNFICYP into a non-military force and of making a park out of the site of UNFICYP’s camp in Famagusta.

Referring to the EU, Tatar said that the EU coordination centre had been transferred to the Ministry of Foreign Affairs, in order to overcome the lack of coordination between them. Tatar also argued that they would exert efforts to carry their dialogue with the EU at the highest level, to effectively implement the Financial Aid Regulation, to broaden the scope of the Green Line Regulation and to implement the Direct Trade Regulation.