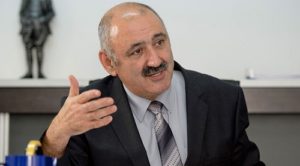 Presidential Spokesman Barış Burcu has said that it was out of the question for the Greek Cypriot administration to act unilaterally on the island’s natural resources, to which the Turkish Cypriots have equal rights, until a comprehensive settlement is reached.

He said that the Greek Cypriot leader, in his official response, had cited his reason to reject the proposal on the grounds that there was a convergence between the two sides to deal with the issue of hydrocarbons after a comprehensive settlement within the framework of a federal authority. “Anastasiades claims that the Greek Cypriot side already recognises the rights of Turkish Cypriots over the island’s hydrocarbons and the need to co-manage them in the event of a settlement. However as it is known, a settlement does not exist and there is currently no joint federal structure to deal with this issue,” he said.

Burcu said that another misperception in Anastasiades’ letter was the claim that Turkish Cypriots’ rights will be safeguarded with the hydrocarbons fund.

“This claim is not convincing. It must be understood that the Turkish Cypriots have a say in all phases and processes of hydrocarbon activities,” he said.

Burcu added that any fund to be set up needed to be decided together with the Turkish Cypriot side.

“The President’s proposal included the establishment of a fund. One-sided decisions and creating funds by excluding the Turkish Cypriot side does not give us a sense of guarantee because our rights cannot be left to the mercy of the Greek Cypriot administration,” he stressed.

President Akıncı’s spokesman said that the President wished to discuss this matter as well as other issues in a sincere and constructive spirit when he meets with the Greek Cypriot leader Nicos Anastasiades on 9 August.

“We believe that it is everyone’s responsibility to reduce tensions in an attempt to open the way for positive developments that will be for the benefit of all sides in Cyprus. The Turkish Cypriot side has always acted with the sense of responsibility and will continue to do so,” he concluded.